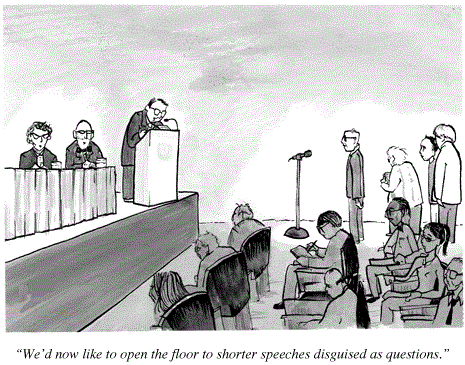 This next slide shows the two research questions I sought to answer in my PhD. Students scored on average 4.26, which is between 4 and 5. What’s really interesting about this chart is that… I have copies of the full report here if anyone would like one. No? Please take one! I don’t want to have to carry them back with me on the plane. Tea or coffee? Where are you from? It’s academic conference season, that small window between when the students finish their exams and the teachers go on holidays, and you might be lucky enough to get some really tasty coffee break pastries and a certificate of participation at the end. If you’d like to get a bit more out of your two days at a conference, read on…

Step One for conference utility-maximisation is to have a plan. Sometimes, the top priority is as little as the extra two lines on the CV for your conference presentation, in which case it doesn’t really matter that you’ve travelled all the way to Hawaii to present your life’s work to six people. It’s more likely, though, that this is an opportunity to hear some of the people whose work you’ve been citing for years, to meet some like-minded people, and to get involved in some cross-border collaboration; let’s face it, there’s not much funding out there for research teams from the same country, let alone the same institution. A well-organised conference should provide a programme of events and even a delegate list in advance, so get your highlighter pen out and see what you want to see. If it all goes well, you’ll be inspired and re-energised, heading home with a head full of new ideas and email addresses scrawled on the back of your conference centre-branded notepad.

Something you’ll get used to at conferences is the extent to which everyone agrees with each other, which is unsurprising when you consider that the whole point is to bring together like-minded people. Potential disagreement is constrained largely because the subject of your criticism is sitting there in the front row and it would be really embarrassing. It’s only the don or the donna who’s able to actually challenge anyone; you’ll recognise them by the awed gasps when they walk into a room and the circle of disciples around their lunch table. They make comments after presentations like, “I think you’re making a really important point but I’m just not sure what it is,” to the laughter of the aforementioned disciples. In a situation like this, you’ll probably find yourself on the inside, in which case you can just ride the positive vibes.

If you’re on the outside and have a concern about something you hear, like a scale with no established validity being translated into seventeen languages and being talked about like it’s the new black, it might be better to keep it to yourself or face being left to stand alone at every break for the rest of the conference. There’s just no room for dissent at conferences, despite what the organisers might claim about wanting to encourage debate, and you’re never going to change the minds of everyone who’s there to be reminded how right they are. The riskier possibility for the outsider is to make your point load and clear, and repeatedly if necessary. There’s the danger of alienation but you could even gain some admirers and disciples of your own.

When you eventually get back to the office, it’s important to be sensitive to those who were left behind. The degree of sensitivity is proportional to the luxury of the conference facilities: If you had a 14-hour flight to a 2-star hotel for a 3-day bore-fest you might even get some sympathy yourself; if it was business class to Venice and 4-course lunches, you’ll at least need to buy some expensive chocolates for your bitter colleagues. It might also help to provide a brief report on the conference itself so that everyone gets at least some benefit from the investment in sending you to Paris for a week. These reports can be as honest or as obtuse as befits the culture of your office. Phrases like ‘the presentation by Dr X was surprising in several ways’ can be a clue to your colleagues that Dr X isn’t all that and they should contact you in person for further details without putting anything in black and white, or ones and zeros.

Staying in your office from one end of the year to the other is a recipe for stale ideas but conference season is a chance to get out and see the world, to broaden all of your horizons, and to think some fresh thoughts. You’re guaranteed to be confronted with an argument you’ve never heard before or some brilliant innovation. Open your mind, sign up for a conference or two, enjoy the pastries, and you never know who or what you might meet.