The magical realism of mixed methods 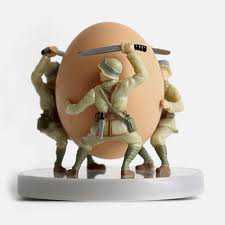 The Big-Endians would have everyone break their boiled egg at the larger end. The Little-Endians would have everyone break their boiled egg at the smaller end. Tweedledum said Tweedledee had spoiled his nice new rattle. There are people whose identity is closely entwined with whether they are a Quant Person or a Qual Person. They will argue long into the night, and long past coherence, that Quant (or Qual) is the one true method and that the other one is like the ghosts of Macondo. What if, like the last page of some magical realist novel, you realised that they were actually both the same all along…?

Let’s imagine that there was only research, only a concern with getting from the not-knowing-something to the knowing-it. If Big-Endians and Little-Endians would only think about the purpose of cracking a boiled egg, then everyone could get on and enjoy their breakfast. For all researchers, the purpose of their work is to make an argument for why their results are important and making a convincing argument means being attentive to your audience. Even in the face of the lazy way we’re taught in school and the short-cuts taken by journalists and that flaw in the human condition, most people in your audience will understand what it means for one thing to be bigger than another thing, so describing those two things in numbers will be somewhat convincing. However, because of people’s incapacity for comprehending numbers (see the one about when a billion is not a billion) telling a story that starts with an important question and ends with a reasonable answer will also be somewhat convincing.

How quantitative research is actually qualitative

“What has that got to do with me?” you ask. “I have no truck with all that vague, anecdotal nonsense. Give me some facts. Give me some numbers.” Qualitative research is about narrative, about stories, and stories are how people make sense of the world. Numbers don’t tell stories on their own but need to be interpreted; a trend graph is a historical novel. Thinking again about your audience, when they get to the end of your statistical wizardry they’ll want to know, “So what?” That’s where your qualitative skills are really needed. Every time you start a sentence with “That means”, and whether you like it or not, you’re turning Qual.

How qualitative research is actually quantitative

They can’t help themselves, but qualitative researchers sometimes have to count things. Even the most florid auto-ethnography uses phrases like “For many people…” and “I once…” that imply frequency and generalisability. More formally, it is possible to convert qualitative data into quantitative data. Content analysis involves counting occurrences of words of interest in some text. If, for example, you want to know about the different kinds of sins in the Bible, it’s just a matter of counting them.

Both qualitative and quantitative approaches can be defined by what they try to ignore: qual ignores numbers and quant ignores feelings. There’s a different way of thinking about the essence of a method, one that makes it less contrary and belligerent, one that recognises that we’re all about the same thing. As well as the Quants and the Quals, there are the people who can cope with the cognitive dissonance of being a Dualist. (That’s a methodological dualist, not a Cartesian one.) There’s too much going on in the world to try to pick it all up with one hand tied behind your back. Stories have a beginning, a middle, and an end: Data are the beginning, analysis is the middle, and interpretation is the end so it’s time to stop bickering and start telling some compelling stories.

Head of Insight and Analytics

The University of Melbourne