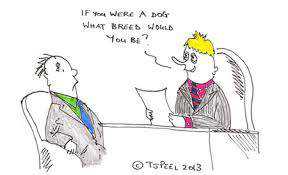 “I thought you were going to go that way,” says your passenger as you speed past the motorway exit marked The Way You Really Should Have Gone. “Did you not know about the ten-mile tail-backs causing four-hour delays?” Clearly, you did not know but if you had you might have done things somewhat differently. Time to resign yourself to a long wait for the next exit, wondering about what might have been. That’s your feedback from the HR manager when you haven’t been offered a job you really should have got, that is. However, we humbly suggest the job-search equivalent of checking the traffic reports before you leave: “Do you have any reservations or concerns about anything we’ve discussed?”

Interviewers have a relatively small amount of information on which to base a decision: a CV or application form with a couple of thousand words and less than 4,000 words in a 45-minute interview. Assuming you can convince yourself that you’re the best person for the job, you then have to convince them as succinctly as possible. In the end, though, interviewers will have to make assumptions and there are two ways that those assumptions can be wrong. Firstly, an interviewer might think you can do something that you actually can’t, and cases like this aren’t too serious as it means they think you’re better than you are and the crushing dismay will only hit them after they’ve hired you. Secondly, they might think you can’t do something that you actually can, a much more serious state of affairs, but one you can avoid if you ask the do-you-have-any-concerns question.

There are other blogs advising people who conduct interviews on the best and most important questions to ask. They often use exaggeration to get your attention, but that’s just hyperbole and there’s no such thing as the perfect question. It’s useful to know what interviewers are being told to ask, because then you can diligently prepare your response, but it’s possible that they won’t ask the things you want them to ask or that they’ll make negative assumptions about you. You’re trying to avoid a situation where they reach inaccurate conclusions about what you can do. The invitation to ask questions of the interviewer at the end lets you seek clarifications about the role or the company and so on. It is also a double opportunity to fix something negative in their perception of you while at the same time demonstrating something else positive that you have to show for yourself.

Asking this kind of striking question at the end of your interview can help you demonstrate several positive traits. You look like you’re genuinely interested in maximising your chance of getting the job. Your capacity for reflection and self-criticism is clear, but also your openness to feedback and interest in self-improvement. The question demonstrates a frame of mind, an enquiring cognitive style that most interviewers will love. It’s also indicative of an approach to problem-solving that seeks to anticipate challenges rather than react to them. There are other ways to get these points across but emphasising them at the end should be an advantage.

For all that people go on about first impressions, or the primacy effect, this question seeks to capitalise on the recency effect, the degree to which the last thing that happens has an extra impact. You’ll be leaving the interview having defused some risky negative assumptions and replaced them with a positive last impression for the interviewer to think about. Of course, their deliberations will be as long as your traffic jam and just as frustrating. The most important impact is that this question should make you stand out from the other candidates, that is, until everyone in the world reads this, but at least you’ll have a head start.

The aim here is to avoid a feedback phone call from a recruiter or HR manager who says something like: “You just didn’t have enough experience of late-night infomercials/sufficient sun exposure/the minimum stock of affection for cats.” Of course, if only they’d asked “Tell us about your televisual habits/holiday preferences/pets”. The do-you-have-any-concerns question will hopefully mean you won’t have to dwell on if-onlies and instead can be satisfied that you made the most of your interview opportunity. Afterwards, all you can do is wait, and hope for the perfect answer.