Someone to watch over me: FIFA’s lesson in supervision 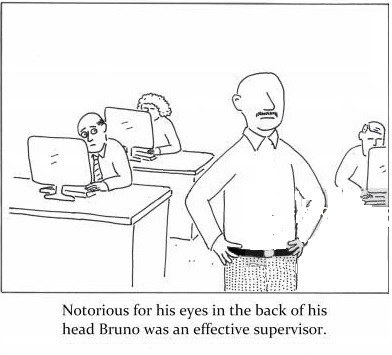 FIFA is in the middle of a bit of a crisis at the moment. The president has resigned, seven senior officials are being investigated by the FBI after one entered a plea bargain, and a former vice-president accused FIFA of interfering in the Trinidadian and Tobagonian general election in 2010. There are allegations of bribery dating back twenty years and millions of dollars in inducement, kick-backs, phantom grants, and un-repaid loans, all under the presidency of Joseph S. Blatter but seemingly without his knowledge. For example, $10 million passed through Sepp Blatter’s office in three wire transfers in March 2008, but he claimed to know nothing about it. At the very least, Blatter is guilty of extraordinarily poor supervision of his staff, not a criminal offence but one from which we can all learn.

Tough at the top

The structure of organisations has moved towards a model of teamwork rather than hierarchy. Sitting in the gantry office above the factory floor or standing, staring over someone’s shoulder watching them work isn’t quite what supervision means anymore. It’s more about team meetings, feedback loops, and autonomy. However, there’s still always someone at the top who is supposed to be taking responsibility for everything that happens. In fact, the pay hierarchies in notionally flat organisations might be a better guide to where everyone fits in than the round table used for team meetings.

Sometimes you’ll still find yourself telling other people what to do, another easy cue to hierarchy. That’s a supervision position, that is, though it doesn’t automatically follow that they’ll do what you say. The first step for a new supervisor is to gain trust and respect and it’s usually a matter of time and not breaking things to show that you know what you’re doing. Plying people with chocolate, cake, and early finishes on a Friday might work too. Frequency of contact changes from supervision relationship to supervision relationship: sometimes you’ll check every equation and every line of code and sometimes you just have to leave them to it.

Apart from day-to-day contact, there are likely to be performance reviews with your team members. Depending on how formal you want to get in these supervision meetings, you might take the time to start with an agenda and end up with some minutes. There’s a risk that a supervision meeting could be rendered meaningless if no one is quite sure what’s supposed to happen next, and if there’s no way of checking whether anything actually changed. Even if nothing changes as a result, though, it’s still an opportunity to talk to your colleague as a person and not just a function. If you’re in FIFA, though, you might prefer not to write anything down. Anything.

Supervision is also about quality control, a concept that harks back to the factory floor or the typing pool but is just as relevant now. Supervisors still get credit, or blame as appropriate, for the work of their team, and if you’re doing it right such credit or blame should be merited. As for Blatter, it has been argued that his failure to see what was going on have been a deliberate attempt to engineer some plausible deniability for when the allegations started.

A particular version of supervision exists In academia, the relationship between a student and their thesis supervisor. The student is expected to move from the role of novice to expert over the course of their studies. For the supervisor, the emphasis can be on implementing procedures rather than on extensive content knowledge. That is, you don’t need to know exactly what the student is doing once they are doing it properly and on time, and you can help them along by asking the right questions to help them think, giving clear instructions, and sticking to your own deadlines.

Inverted expertise can be an issue in other sectors too. As technology progresses and graduates learn more and faster than the rest of us, it’s likely that your new recruits know more than your long-haulers, and maybe even more than you know yourself. It could go either of two ways: one leads to jealousy, resentment of their youthful vigour, and a vindictive style of supervision while the other sees the value of their refreshing and elegant solutions to your old-fashioned problems. In both scenarios, you can still take all the credit for anything good they do.

Ultimately, supervision is about responsibility and the final product reflects on the supervisor. Investing time and compassion in your team can help them feel warm, fuzzy, and more productive. So if your people are doing a brilliant job, then you are too and if your people are engaging in financial transactions of incomplete legal and moral integrity, then it’s a failure of supervision.

Associate Professors in Statistics at the Department of Mathematical Sciences