The necessity of teamwork 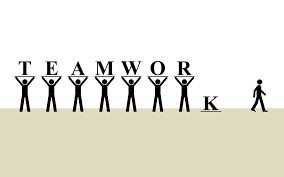 The task is simple: take a pile of car tyres, pieces of wood, and bits of string, build a 50cm platform on which you can stand, and do it quicker than everyone else. The trick is that none of the piles is intended to be sufficient so that, sooner or later, some great leader will emerge to unite the individuals into one big team to build a super-platform of peace and harmony on which everyone can stand together holding hands. Contrary to the intention, however, you have just finished fashioning a perfectly adequate effort when some do-gooder starts to dismantle it in an ultimately futile bid to pool everyone’s resources for the greater blahdy-blah. In a fit of rage, you vow never to co-operate with anyone ever again. Ever.

Every company is a team

Candidates will have the ability to work independently or as part of a team, all the job ads seem to say. In the era of flattened management structures when your boss is as likely to wear a Thundercats t-shirt as a three-piece suit, you’re going to end up working with a group of people rather than in a chain of command. Ideally, teams are united by a common purpose that would be unattainable for any individual. Team members have varying levels of experience (salary) but ideally have inter-dependent, complementary skills. Based on understanding that mutual reliance, successful teams are characterised by mutual respect, manifest through active listening, consultation, and recognition for a job well done.

The other thing that every team needs is a leader. Leaders are the ones who define the purpose, making clear to each of the members how their contribution brings everyone closer to the shared goal. If you’re the one at the top, then you probably have plenty of examples of projects through which you guided a team, and what you learned about yourself along the way. There’ll be interview questions about leadership style and if you just have a glance at (the table of contents in) any management book you should be equipped with sufficient terminology to describe your own style.

Even in statistics, having honed your skills sitting alone at a computer, most jobs require some kind of team work, and it could be as little as the interactions with your supervisor involving praise for how quickly and expertly you did the last thing and instructions for the next thing. More likely, though, you’ll be part of a multi-disciplinary team with lots of those complementary skills. The nice thing about complementary skills is that other people know lots of important things that you don’t; unfortunately, it also means that they probably know nothing about stats.

It’s such an easy, normal, obvious line for a recruiter to put in a job ad and practically every job involves spending part of your time working alone and part of your time in team meetings. Actually working in a team, though, can be hard. Practically everyone has had to work late because someone else on the team made a pig’s-ear of their bit, or sat silently through a meeting and wondered why they were there at all, or listened to complaints about how badly things are run around here from people who can’t seem to just get on and do some work.

Apart from the time-wasting risk of a poorly organised team, teams fall short of the ideal whenever internal competition arises. Everyone is somewhat self-interested and the leadership trick is to make sure the team goals out-weight any individuals’. If everyone only cares about getting a promotion, there could be back-stabbing, rumour-whispering, and, when someone does get promoted, revenging. At least for the duration of the interview, then, remember to be civilised and mature in how you describe how you deal with colleagues, and how gracious you can be at times of disagreement.

When the stage of the interview comes for you to demonstrate your ability to work independently or as part of a team, the working alone bit should be simple enough: Your self-reliance and wit can build a platform fit for a Lion-O. After that you can impress them with your insights about what makes teamwork work, about a shared vision, about mutual respect and appreciation, about leadership. Just remember that it’s all for the greater good.