When story-telling is censorship: How independent is your research? 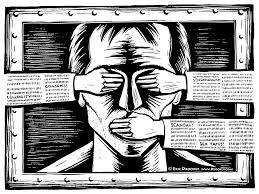 “Into the woods you have to grope, but that’s the way you learn to cope.

“Into the woods to find there’s hope of getting through the journey.”

So sing the Baker, Cinderella, Little Red Riding Hood, and Jack (of the beanstalk fame) in Stephen Sondheim’s Into the Woods. Sondheim himself was caught up in a brief independence and censorship controversy over whether or not Disney wanted to exclude a decidedly 18+ rated encounter between Cinderella’s Prince and the Baker’s Wife from the up-coming film version. Into the Woods is based on what happens when fairy tales and their characters collide and, without wishing to give anything away, it all gets a bit messy.

Consider what happens when new data collide with existing, sometimes long-standing, sometimes entrenched ideas. “They want you to leave a bit out,” you’re told. “Which bit?” “Well, they want you to cancel the presentation altogether but I suggested it might be alright if we left that bit out, the negative bit.” They say, “See the way you’ve emphasised the similarities between males and females in your report?” “Yes, there are some surprising similarities alright.” “I’d prefer if you focused instead on the differences, just like I have for the previous 30 years.” When your higher-up or your funder creates a mess like this for you, when your new work collides with the story of their life’s work, when your independence is challenged, the choices are to acquiesce, to rebel, or to compromise.

To acquiesce is to bring immediate relief and release of tension, to get approval for your obedience, and to feel like you’re on the inside. That’s a considerable short-term gain but the warm, fuzzy feelings might not last. Most people have a vague desire to make things better, on the basis that the status quo isn’t all that great. So, by just going along with how things have always been, by avoiding any trouble, upset, or controversy you’re telling the same old story rather than writing a new one.

Depending on the degree to which you are passionate about the whole global-improvement project, you might refuse to co-operate with anything that undermines the very principal of independence. The most extreme examples are whistle-blowers who risk their careers and their lives to tell the stories their own higher-ups never wanted anyone to hear. Not every example of censorship, editing, or spinning, is in the same category but refusal to tolerate any perceived injustice or interference could make a difference to most areas of work.

It could be the case, though, that the lower-downs know a bit less than the higher-ups; of course, it’s impossible to know that until you become one of the higher-ups. There are agendas and relationships and imminent announcements and reputations among the myriad of contextual factors when you stand up to make your presentation or when you publish your report. Without knowing what they are it’s easy to imagine that nothing could be more important than your new big idea, but there could be a good reason for the intervention, some genuine dependence that trumps your independence. Allowing the higher-ups the benefit of the doubt but wanting to retain your principals, it’s time to compromise.

Like any negotiation, you need a starting position and a bottom line. The starting position is the story you’d like to tell, with all the novelty and the twists and the scary characters, no matter how unpopular it might be. The bottom line is the moral of the story that you won’t allow to be changed in the telling. Even in statistics, which is supposed to be objective and all, there’s plenty of room for selection and interpretation and plenty of scope for pressure. You might have to grope your way through, it might get messy, but try to keep true to your story.

There are the very obvious examples of censorship – the banning of books, the blocking of websites, the internment of journalists – and then there is the minor, local, almost invisible censorship that you sometimes don’t even notice until you find yourself deleting that slide from your presentation or re-writing that paragraph. Having been trained to think independently and guard your independence closely, it’s likely to be squashed, squeezed, and compromised in the real world. Censorship usually occurs when someone wants to tell a particular story regardless of the evidence and it risks turning everything into a fairy tale so you’ll need to be brave, just like Little Red Riding Hood.