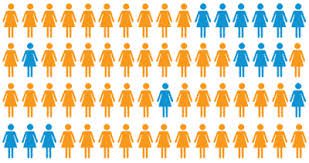 Are there any women here? asked the High Priest at the stoning in The Life of Brian. Of course, there weren’t any, only bearded men with deep voices. Are there any women where you work? Do they have to pretend to be men to be included? Do they have to laugh at the sexist jokes to get along? Just for today, we’ll ignore the argument that women just aren’t all that good at sums. If we assume, then, that women could have careers in mathematics and statistics, there must be some genuine barriers, and some that are deeply engrained. Culture changes slowly, one conversation at a time so here are some new ideas for the next time someone talks about women in stats.

There are only a few women at the top in maths and stats careers, so there must be something about what it takes to get to the top that keeps them out. Promotion is competitive and being able to work long hours and being available to travel at short notice are the kinds of things that usually count; neither of these is really an option for women with families. Women, apparently, have a choice: They can have a family, in which case their career prospects are at least reduced, or they can have a career.

Maybe there just aren’t that many women who study maths and stats in the first place, in which case there aren’t even many women in the profession at all, let alone any candidates for promotion. It’s also possible that women look at male-dominated careers, and at the attitudes and prevailing norms, and go for something else. They might look at the family-career choice that they’ll face ten years after starting an undergraduate course and look for a profession with a better developed culture of balancing work and life.

Getting over, around, or through

When girls are making decisions about the subjects they’ll study at school, anyone privileged enough to be in on the conversation could at least raise the possibility of studying stats. Girls who have had opportunities to do things other than homework with maths, like programming and game design, might also look more favourably on those maths and stats options. If you’re a teacher at third level, in a secondary school, or even in a primary school classroom, think about your expectations of the girls and women in front of you and how you might encourage them.

Keep an eye out for everyday sexism wherever you live or wherever you work. There might be women of lots on your committees, but it might be the same woman and if she’s on all those committees, she might have less time to do any real work. You might have a rotating department head, but you might notice that there’s only the one token woman involved in the rotation.

If you’re a woman and you like maths, hopefully you feel that things are changing enough for you to pursue a career in statistics. If you can do it, you become another good example for younger women, blazing another trail and making it easier for those that follow. To help you along the way, find examples who are a bit ahead of you and ask them for advice, and don’t forget to thank them for making it all slightly easier for you. No matter what level you’re at, you can be a mentor for other women too.

Little girls might be interested in things with numbers if they’re comfortable with numbers, and with thinking in three dimensions if they’re comfortable with shapes. There’s no lower limit on when little people can start learning about maths: from the time they’re born count your way up the stairs, and if you’re really nerdy count backwards on the way down; talk about and name shapes; build towers so your little person can knock them down and soon they’ll want to build for themselves. You might find that the toys that involve building come in blue boxes, and a bit of blue in a little girl’s life might be good for her.

There are no women at the stonings anymore, but that’s down to the reduction in the number of stonings; there are still plenty of places where there are not enough women. If we can show the kind of creativity and ingenuity that came up with selling false beards to women, we can get over, or around, or through any barrier that keeps women from where they want to be in maths and stats careers. Getting them to want to be there starts with counting the first step up the stairs.